Ten Safe and Affordable Areas to Rent in London

London is a wonderful city and, as any other buzzing  capital with millions of people, safety is one of the most important considerations when it comes to deciding the safest area to live in London.

London is surely not consider a dangerous city and  it has one of the highest number of CCTV cameras of any city in the world. London’s 33 councils operate 7,431 public CCTV cameras.

According to Met Police’s records, the crime rates have fallen by 21% over the last 5 years. In particular, the outer London registered 67.4 crimes every 1000 inhabitants, almost in line with the UK crime rate average in 2013 (66).

Focusing on Recorded Burglary Rate, the table below shows the Ten safe and affordable areas to rent in London with their respective average room price and tube zone. 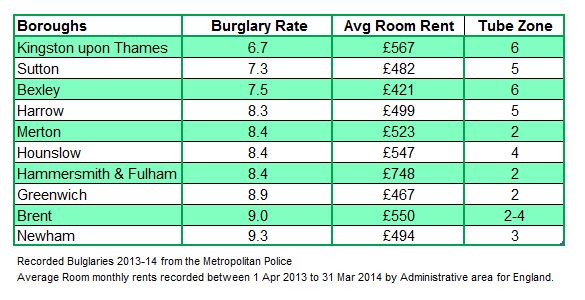 The Burglary Rate measures the number of crime per 1,000 inhabitants and it is calculates as following:

There was a total of 698,729 reordered crimes of burglary in London in 2013/14, a fall of 9.44% on the previous year, thus an average of 10.1 burglaries every 1,000 people.  The boroughs which experienced the highest number of burglaries between 2013-2014 was Westminster (17.5), Camden (13.6) and Lambeth (12.1). It is important to note that recorded burglaries does not necessarily mean a crime actually occurred but is a reasonable and widely used measure.

To conclude, these findings show that London has several lovely areas where you can get both safety and affordable rooms to rent.

Population growth in London’s boroughs since the 19th century